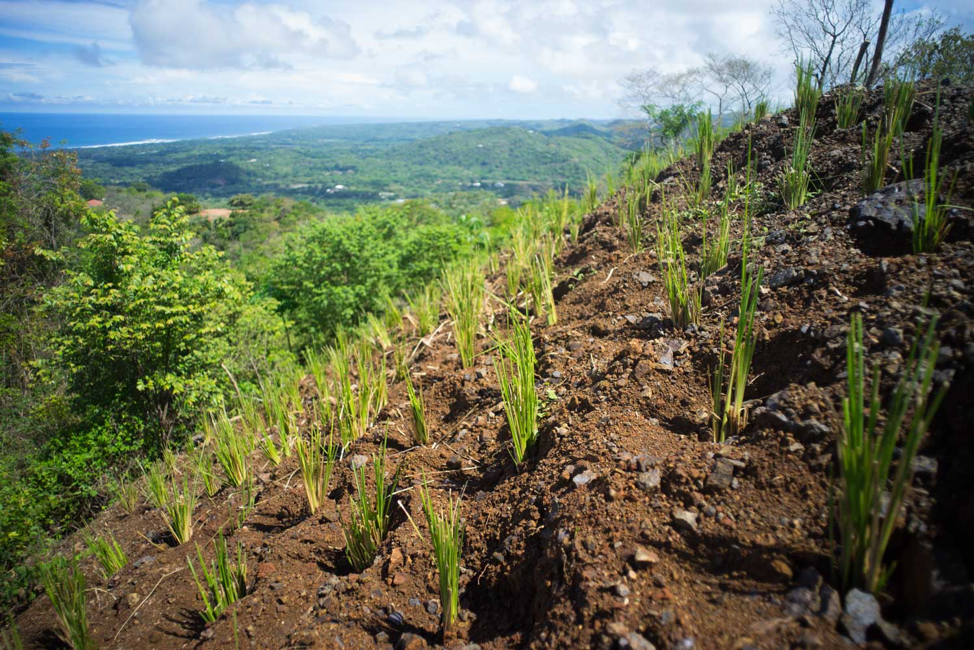 by Josh
What does a densely tufted perennial grass from India have to do with to do with lots in Costa Rica?

To explain we have go back in time to the 1950s in Fiji and meet a man named John Greenfield.

John was a sheep and cattle farmer from New Zealand who worked in the tropical climates of developing countries for 40 years developing sustainable soil systems.

John’s mission was to develop simple eco-friendly technology for use by the poorest subsistence farmers.

While working for the Sugar Corporation of Fiji, he discovered an Asian grass called Vetiver.

The problem he was trying to solve on the Fijian sugar plantations was the erosion of soils on the steep slopes where the sugar cane was planted.

During rainy season there and in Central America, there can be a torrent of water that moves so quickly it can cut big holes in the earth and take all the plants with it.

This is a big problem if it happens in an agricultural area like a sugar plantation or land that has has no ground cover like a homesite.

As water builds up speed down the tropical slopes, the topsoil is scraped off the surface and the water doesn’t absorb, which can cause long-term problems.
To make matters worse, the water is particularly destructive in the soft dirt found in many places in the tropics.

John had watched this process unfold during the rainy months for years. He was unhappy with the modern solution of using concrete to make waterways and drainage because it was expensive and wasn’t effective at getting the water to absorb into sloping areas.

While in Fiji he discovered a miracle grass that he would test and ultimately discover was the perfect solution for treating these problems.

The grass is called Vetiver. It is a clumping grass from India that doesn’t look so special, but when you learn what it can do, it might as well be called a miracle plant.

First Vetiver has a root structure that grows straight down instead of spread horizontally along the surface.

Mature plants will penetrate the earth as deep as 20 feet (6 meters) straight below the plant.

The roots bind the earth together, but these roots are also super strong. In fact, one mature plant is comparable to a 4-inch diameter steel bar anchoring the soil 12 feet deep.

Vetiver is really effective at holding land together and costs about 10% of an equivalent concrete solution.

Above the surface this miracle plant works just as hard.

When arranged in rows, Vetiver creates a filter that allows water to pass slowly but keeps the topsoil or surface debris from passing through. This has two effects, the topsoil accumulates at the hedge rows instead of getting washed away, and the velocity of the water running downhill is slowed so more water absorbs into the land, feeding all the plants.

You can literally stop the land from sliding with this stuff. I have seen it used on completely unstable fill or even sand and if given a chance to grow, the grass will stabilize the entire area. In India there are Vetiver hedges that are hundreds of years old and still working well.

The only negative is that because Vetiver doesn’t spread on its own, you have to dig up each clump and break it into pieces to spread it around the property.
John Greenfield nailed his mission of finding an inexpensive solution that could be used by anyone.

In La Paz, our real estate project in Nosara, Costa Rica, we just planted about a thousand different starts of the grass just in time for rainy season.
We use it to stabilize slopes as well as reroute water as it flows downhill, and it also looks good.

Once it is established, we can transplant it to new areas that need it and we will never have to buy it again.

If you are interested in checking out our project, we still have some great lots left in La Paz and you can see them here.