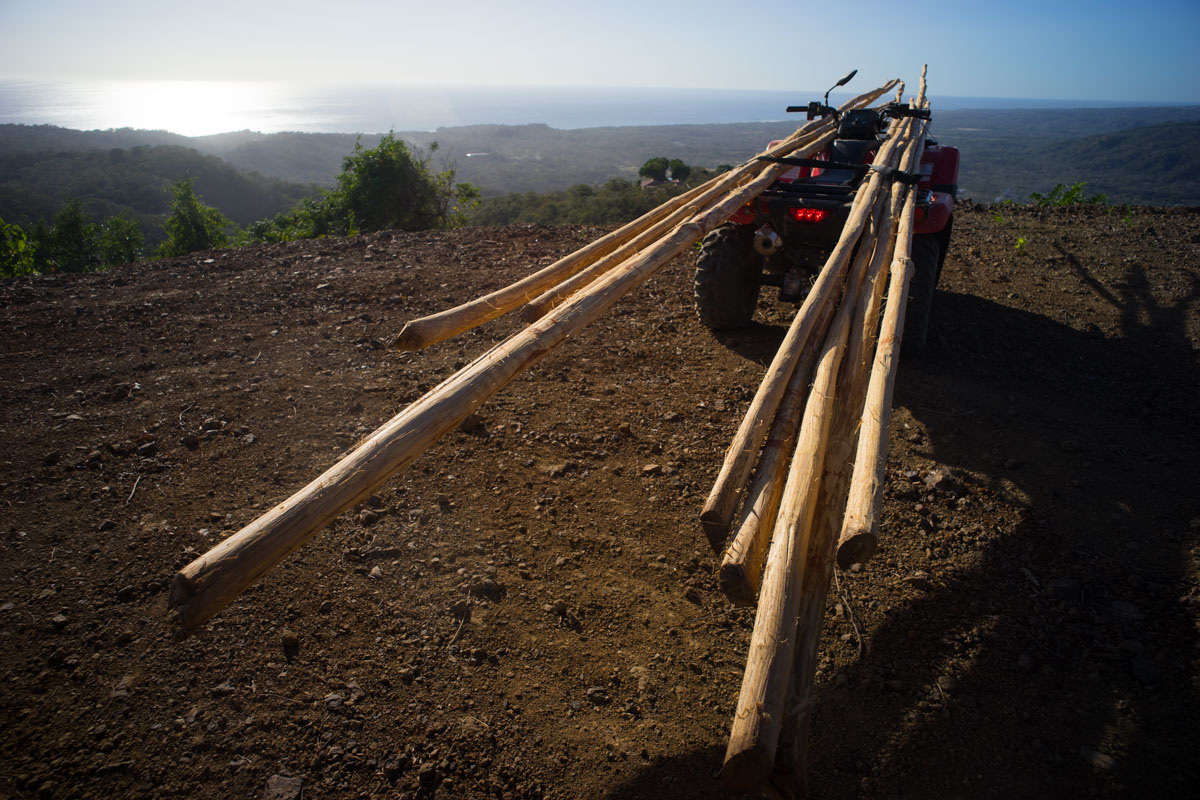 by Josh
I have been interested in alternatives to brick and mortar dwellings for a long time.

In the tropics it is warm all the time and you can experiment with the function of a home.

A house near the equator still needs to perform the basic functions of any home: protection from the elements, safe space, a place to cook and eat, etc.
Once you are here and building and observing it doesn’t take long before you notice that you don’t need a building to stay warm. You need a building to keep you cool and dry.

There are many romantic pictures on the internet of shacks put together with driftwood or just a roof and no sides overlooking a beach. These are not permanent dwellings, but great places to pass some time or spend a month or two in the tropics.

For me it poses the question, what is the most minimalist way you can live comfortably?

The idea of nomadic architecture or architecture that can move when you do has intrigued me for quite some time.

Light structures made with natural materials that can move sent me towards exploring tipis.

We have had these discussions as a company and integrated those debates in our other projects.
The first time we really had the discussion about minimalist living was at our Playa Burica project in Panama several years ago.

There were limitations to building in that particular location because you had to drive down a beach for two hours before you could even get to the property.

The drive down the beach was not just a cruise in the sand either, it was a rigorous drive over a rocky reef that felt more like the surface of the moon at low tide than a tropical paradise.

The tide prohibited regular supplies from being brought in to the area. Not to mention the nearest hardware store was two hours away; this forced us into considering alternatives to build.

We needed something to stay in besides a tent. And we could only spend three to four hours on-site due to tidal swings. It was impossible to pass with a car at high tide and you had to make it to the end of the 2-hour drive before the tide got too high or you would lose the car.

There were many hero voyages on that route, especially when during the last 10 minutes the pulsing waves covered your tires. It was adventurous but also very stressful.

The first type of dwelling we considered for Playa Burica was Yurts. Yurts have the appeal that they can be built in a weekend and have less environmental impact than a traditional block structure.  But after really pricing them out and considering the deck we had to build to get them off the ground, they seemed expensive for a basic dwelling that was sure to be an absolute hot box in the tropical sun.

It was around that time that I had a conversation with a local who was walking down the beach.

The conversation revolved around a rancho that was part of the house I was staying in towards Puerto Armuelles.

A rancho is a wood structure with a palm frond roof; they are ubiquitous in Central America and there are several versions of them.

It turns out the guy was a builder and was convinced we could build ranchos for much cheaper than yurts and it would be a better dwelling for the area in terms of design options and comfort, and it could be locally sourced.

We could get all the supplies except the toilet, sink, plumbing pipes, and a few bags of concrete from the jungle around the property.

I was sold and that is what we did. People loved the idea and it fit perfectly for someone who wanted to come down for weekends from Boquete, or spend a month at a time. The structure was not meant for permanent living and would need to be more closed off to allow full-time occupancy. 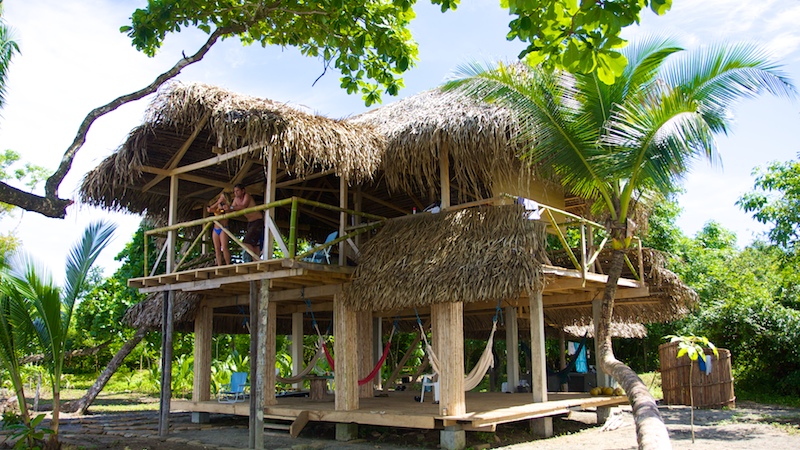 Since then the minimalist dwelling has been on my mind.

Is there a more minimalist option that works as a shelter than the rancho/cabana that we were using in Playa Burica?

This question got me interested in Tipis. They look cool, ideally you can move them around as you want. They are mostly waterproof, as you have control over how much water gets inside with the smoke flaps. Their size-to-weight ratio is great and they are made of natural fibers. The tipis I was interested in were made of organic cotton.

The issue of course is would a tipi survive rainy season without molding?
No, but it was possible to add a coating to a tipi to prevent mold and that might work. But I am thinking dry season only for this dwelling.
At a cost of about $2,000, if the tipi could last a few years, it seemed like a great option.

All you needed were poles, a skin that goes around the outside, and liner on the inside and if you bought the kit you got all the rope and ties you needed in two boxes.

I ordered the kit that included everything but the poles, I was going to have to make those.

The tipi itself was a 20-foot tipi, which refers to the width at the bottom of the tipi. I would need poles at least two feet longer than the width of the base of the tipi. So that meant I needed at least 22-foot poles and I needed 17 poles in total.

Once I arrived with the kit and materials after being teased relentlessly by family for carrying two 65-lb. boxes on the plane, I just needed to figure out how to get poles.

Down here in Costa Rica the most obvious choice would be to use teak as there are several teak plantations in the area and they tend to grow long and straight. The young trees are the ones I was after because I was hoping to find trunks with 5.5-inch bases that taper two inches.

I contacted a friend of mine and we went up to a teak plantation and found a couple of good trees that would make a great start. I figured it was going to be a process because everything in Central America is a process. So if I could get a few poles here, a few there, and figure out how to get them to my site, that would work for me.

The young cut teak trees are called “barras” or bars in English and can be purchased for about $10 each. People use barras for all kinds of things including construction of ranchos.

The first issue I had was once the trees were cut, they had to be peeled.
I was used to peeling trees back in Washington State where I grew up and spent a summer peeling pine trees for a furniture company. The first thing you learn peeling pine trees is get the freshly cut ones because they have the most sap and peel quickly, which matters when you are getting paid by the tree. I figured the process would be the same with teak trees.

Unfortunately for me, peeling teak trees caused some blisters.
After the trees were cut I saw my friend with the chainsaw looking around for something. He said we needed a “strong” tree.

He found a big branch the size of a fence post and cut it off.
It was then that I found out how we were going to peel these teak barras.
We were going to use that stick to whack the thick bark on the trunk repeatedly to break the bark down enough to peel it with our hands.

Imagine swinging a fence post to hit another piece of wood over and over, uggh!. It took me about one hour to do one barra and I had blisters by the end.

Of course my local friend was knocking out about five per hour, so I ungraciously exited stage left so he could finish and I could nurse my wounds.
Once the bark was peeled and the trees had dried over about a week’s time, it was time to apply linseed oil on the bare trunks for weather and bug protection. 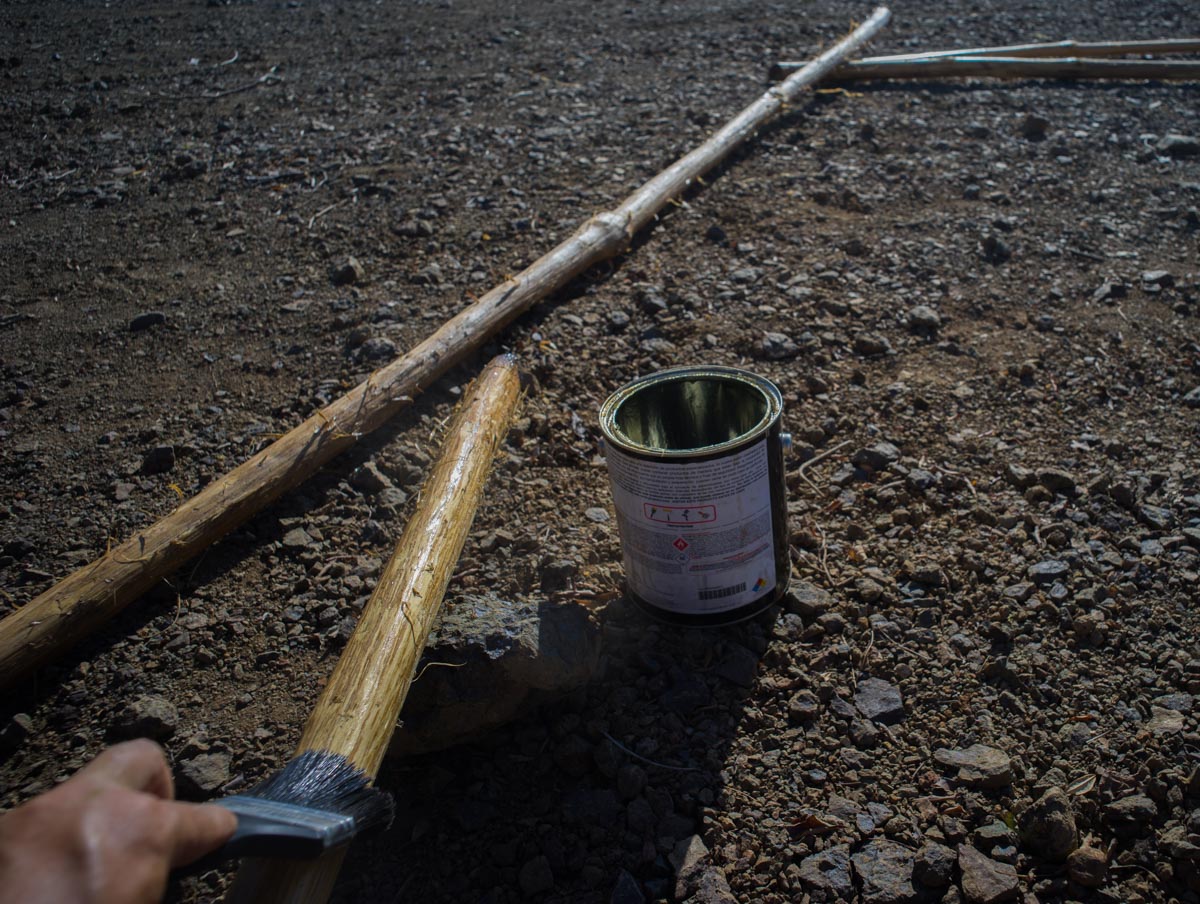 I did this alone over the course of a couple of days.
Now I had all the materials I needed to build the tipi.
Instructions were included and a plan for putting the poles in the correct position. The concept is based on a three-pole tripod that acts as the main support for the structure, you then layer in the other 12 poles.

The last two poles are for the smoke flaps that can open and shut depending on wind direction and if you have a fire inside. A fire is hardly necessary in the tropics, but the smoke does keep the bugs away and tipi skin dry if it rains.

The next step is putting the skin on. You tie the skin to a pole, lift up and place it against the other poles, then unfold the skin around the skeleton of 15 poles that are arranged in a circle. You try and get it as tight as possible, then you attach the interior liner. The interior liner has an overhang of about six inches on the ground and you put rocks or wood on that to weigh it down and seal the outside from the inside of the tipi.

Once we were done with this, we arranged the ground cloth and put in beds and a table, and started sleeping in it on the weekend. 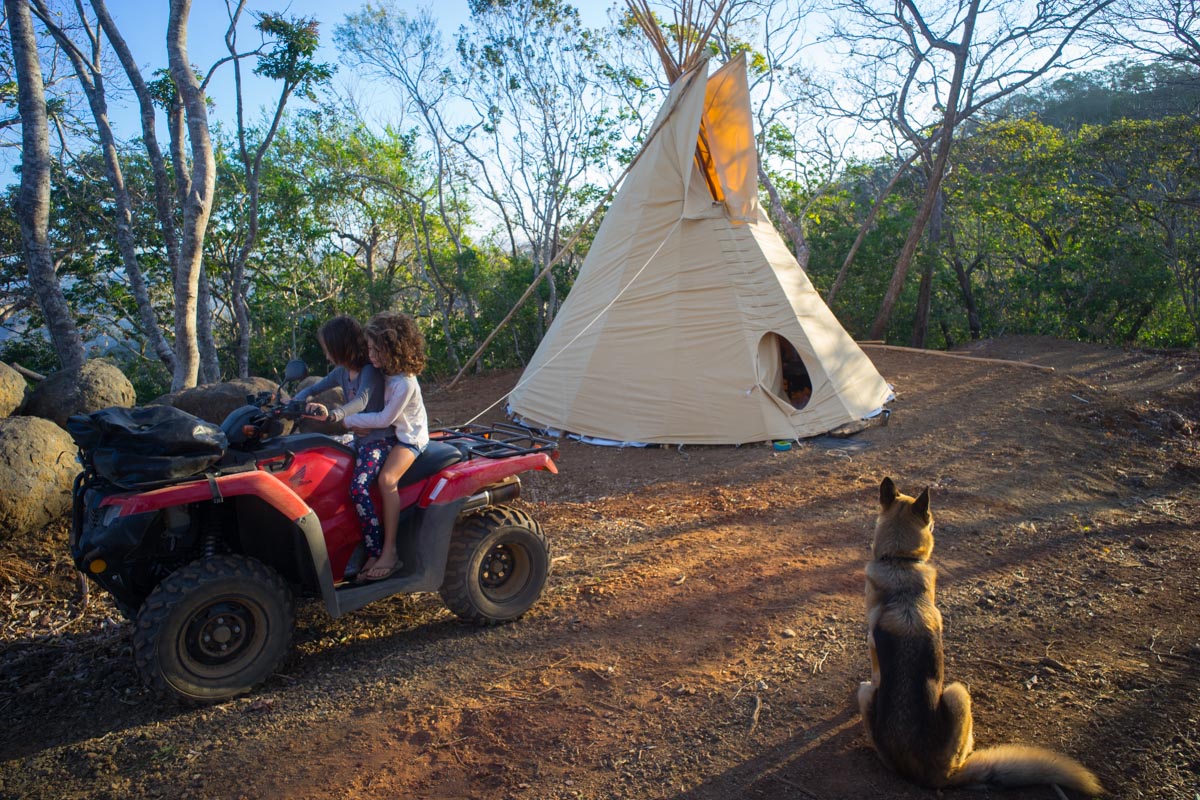 Our tipi is about one mile from our house. My daughter has had some friends come and stay in it and we load up the 4-wheeler with pillows and fresh sheets and head out to the tipi.

Overall I like it and enjoy spending time in it. Because it is not open air and you are tucked away inside the skin it has real comfy feel.

The tipi is also very sturdy; the first night we had a crazy windstorm and it held its ground like a savvy Indian war chief.

I will have some updates on this article as I spend more time in the tipi and let it weather a bit since it has not been up that long.