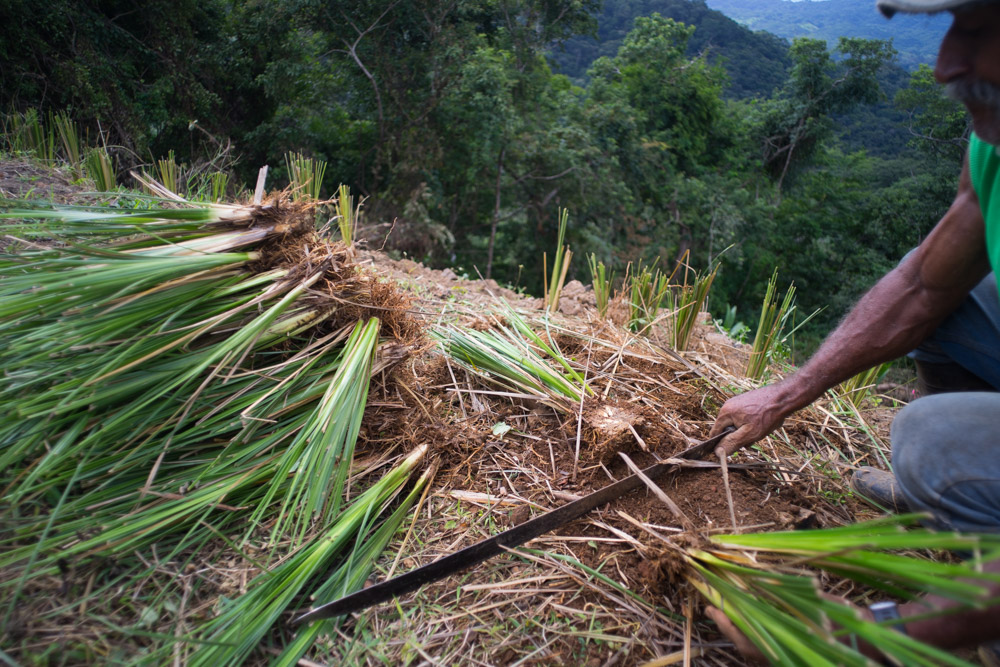 Previously,  I wrote about my permaculture project on my land where I am going to build in the La Paz project in Nosara, Costa Rica.

This week I will tell you how it has been working out on the ground and what I have learned along the way.

In my research on garden and permaculture techniques I came across a design that was being used in Pacific Islands on steeper slopes. It was this way of planting that sparked my interest and I knew it would work.

The design used hedge rows to solidify the ground from erosion, increase water absorption instead of causing run off, and would provide materials for fertilizer on site. I chose to use vetiver grass as the hedge row since I had a good supply growing right on site.

Vetivers deep root structure mines nutrients from below ground then brings those nutrients up to the leaves. Every few months we will cut the vetiver to stimulate root growth and then use the cuttings/leaves to mulch the trees planted in the rows.

Adapting to My Site

My site was a slope that dropped about 50 ft off the front of my building site towards the view of the ocean.

For me this meant that I whatever was planted needed to be planned to not grow and block my view of the ocean.

For this reason, I planted the tallest growing trees in my plan, Coconut Trees, on the bottom row.

I also focused on a dwarf species that produces coconuts quicker and does not grow more than 25ft high on average. This way when I look at the view I will look out over a coconut palm canopy towards one of my best ocean views.

After all I am a real estate developer so it might as well be pretty, right?

The next row up are Citrus plants that ended up planting in a staggered rows of two for a citrus section.

How did the plan go?

I definitely ran into problems along the way.

First, I didn’t use a level as suggested in the planning.

I made this choice mostly because I didn’t have the supplies to make the type of level I needed and figured it would not be too difficult to follow the contours of the land.

After all I had plants just sitting there drying out waiting to be planted.

In hindsight having the level would have been very helpful to make sure the hedgerows were more level so that water saturates evenly along the row.

The whole purpose of leveling the rows based on the contours of the land is so that as you run your hedges perpendicular to the slope. This will make the water that runs into the area saturate evenly and not let gravity push it one direction too fast causing run off and worse land slides.

I had to change one row because it was clear that the water would drain off a side that was one of my more sensitive erosion areas, By changing it the water would be kept away from that spot not guided to it..

This cost me about 5 extra hours of work.

The nice thing about this process is that you can make several adjustments at this stage, you lose time, but you can look and change things as needed. You can even make changes to rows months or years later as you see how they are working over time.

Laying out the Grid

The exception to changing plant position in future is the trees you plant, once they are in the ground you can’t just keep moving them or you could kill or at least stunt their ability to produce and grow.

My whole plan was based around where the trees would go, but to know exactly where they would go I had to determine where the hedgerows would be planted first.

The plan was to create hedgerows then in between the the rows plant the trees.

To plant trees I had to lay out all the hedge rows first, I didn’t have to plant the hedgerows first, I just needed to know where they were going to go then I could plant the trees. 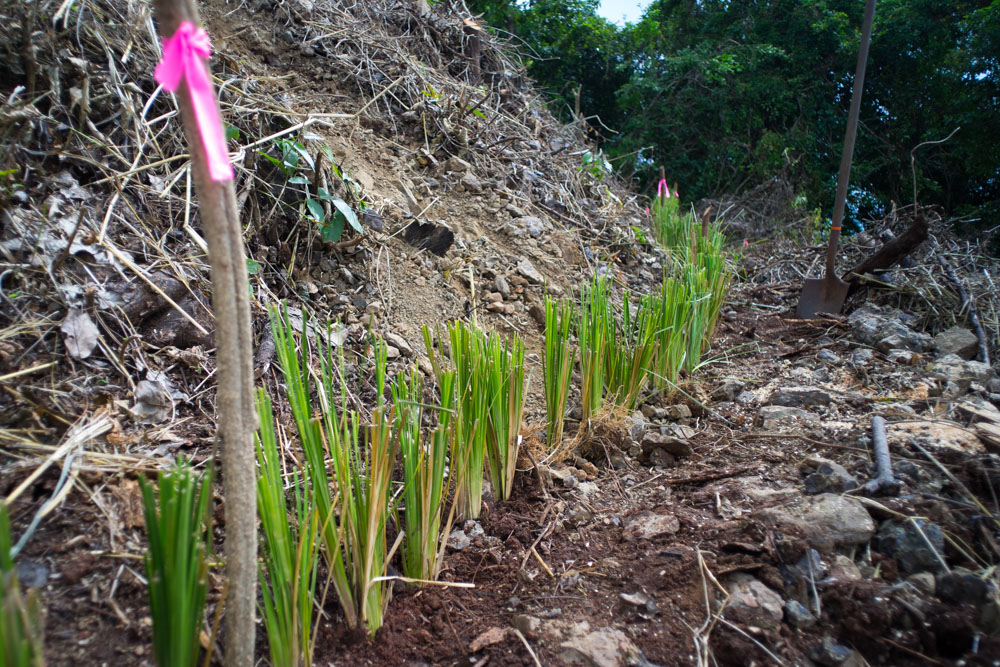 Last weekend we started with clearing the area then taking all the brush and organizing it into rows.

We had to do this because it was too steep to carry it out, and it could be used a mulch to keep moisture in the ground longer now that the seasons are changing.

Next we created some reference points in the middle of the slope to use as we layer the remaining grid.

To create stakes we took some choppings and turned them into stakes with the machete.

In doing this we were placing each stake about meter away from the last stake depending on the grade/slope of the land.

The stakes mark where the hedge rows would be planted, so this system would adjust the width of the hedgerows based on the slope/grade.

Narrow rows for steeper land and wider rows for a flatter pitch. Steeper slopes make water run down faster so narrow rows pack more rows into that space to slow the water, but on flatter slopes the water is slower and can allow for a wider row. 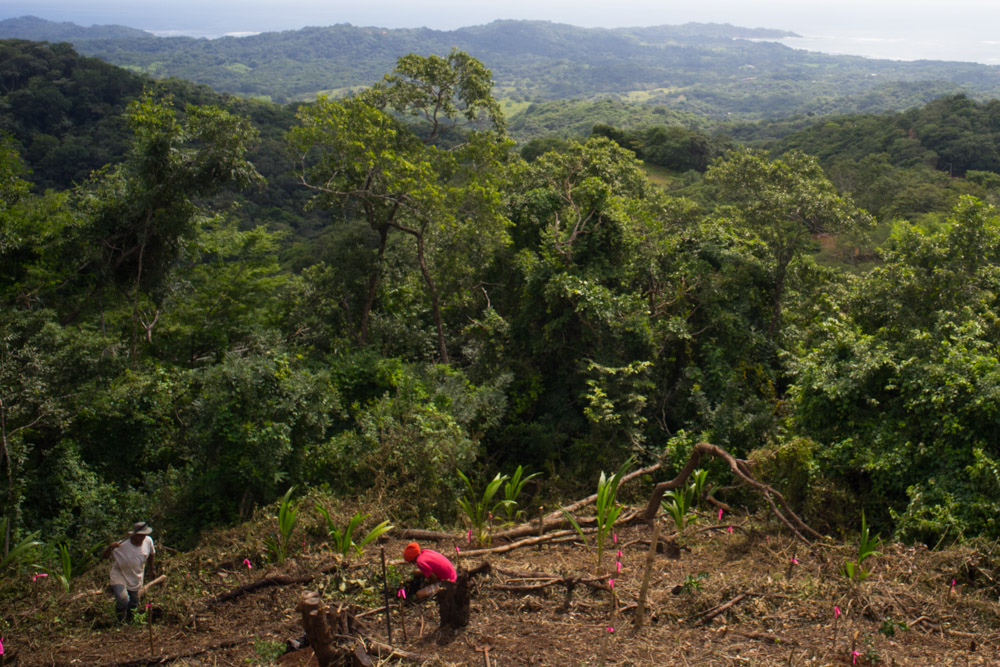 Caption . The pink dots are stakes marking points in the grid. You can see the Coconut Trees too.

This also will make it look cool since the technique will naturally adapt the rows to the slope of the land instead of just being several parallel rows that look kind of boring.

Once we had set up the grid with dozens of stakes in the ground we marked each stake with pink tape to get a sense of the grid as a whole to commit to a planting plan.

It was then I could see where to plant to the coconut and citrus trees.

Next we planted the trees in the ground. We also started digging up and chopping vetiver into smaller parts to plant into hedge rows below in the new area.

To give the trees enough space I had to adjust a couple of the hedgerows a few times, this was because I didn’t have a level and had to eye ball the row in terms of where it went on the slope.

The project will continue for the next couple of weeks for the initial completion, but I will continue to tinker with it for years I am sure.

The cool thing is that this technique can used on almost any lot in La Paz, so if you want to live in La Paz and create your food supply this is an awesome technique.

Check out La Paz here if you want to see it.

Have a good weekend